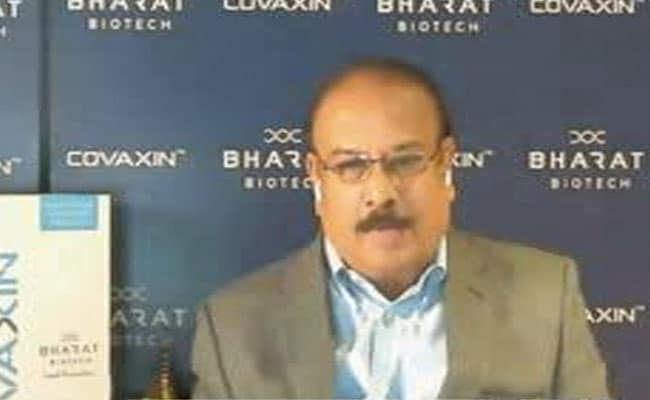 The chairman of Bharat Biotech – whose coronavirus vaccine Covaxin was yesterday given “restricted use in emergency situation in public interest” – hit out today at critics querying the lack of Phase III trial data and others questioning the drug’s efficacy, branding it “… safe, like water”.

An indignant Dr Krishna Ella addressed a virtual presser and said his company had carried out “200 per cent honest clinical trials”, had an established track record in producing safe and efficacious vaccines, and was transparent with all data. “We don’t deserve this backlash,” he declared.

“Don’t accuse us of inexperience. We are a global company… have manufactured 16 vaccines. It is not correct to say we are not transparent with data. We conduct clinical trials in many countries, including the UK. The point is we are not an Indian company… but a global one,” Dr Ella said.

“We have published in a lot of journals. We were the first to identify the Zika virus and the first to file a global patent for the Zika vaccine and the Chikungunya vaccine. It is not correct to say that we are not transparent with data… we don’t deserve the backlash,” he added.

“We have the only BSL-3 (bio-safety level 3) production facility in the world, even the US doesn’t have it. We are here to help public health emergencies in any part of the world,” Dr Ella declared.

On Sunday the Drug Controller General of India granted emergency approval to two Covid vaccines – Bharat Biotech’s Covaxin and AstraZeneca-Oxford University’s Covishield, which will be manufactured in India by the Pune-based Serum Institute.

The decision to green-light Covaxin triggered a row, with critics pointing to a lack of efficacy data at this time. Covaxin has completed only two of three required trial phases; the third – which tests for efficacy – began in November. The two earlier phases only ensured the drug is safe.

Covishield, meanwhile has completed all three phases and submitted data to the DCGI.

On Sunday Serum Institute CEO Adar Poonawalla told NDTV “there are only three vaccines with proven efficacy – Pfizer, Moderna and Oxford-AstraZeneca. Everything else has been proven to be safe, just like water.”

Today Mr Ella hit back at that remark (although without naming Mr Poonawalla) and said: “We do 200 per cent honest clinical trials and yet we receive backlash. If I am wrong, tell me. Some companies have branded me like ‘water’.”

Earlier the ICMR (Indian Council for Medical Research, the centre’s nodal body in this crisis) acknowledged that it had not efficacy data for one of the two vaccines cleared for emergency use.

However, when asked to comment on Covaxin, Dr Balram Bhargava, the ICMR’s Director General, told NDTV: “The indicators are it has very high efficacy”. He also said that efficacy data from Phase I and II trials showed ”a tremendous amount of immunogenicity and safety data.”

Dr Ella today defended the decision to award Covaxin emergency approval, pointing out that “even the US government says emergency authorisation can be given if a company has good immunization data.”

(Except for the headline, this story has not been edited by INDIANTALKS staff and is published from a press release)